On Hallowe’en I Wore My Homo Sapiens Costume

On  Hallowe’en I wore my homo sapiens costume to hide the fact that I’m actually homo artificialis.  While the streets teemed with kids dressed as giant iPhones and Terminator robots, I wandered the city, for once passing the Turing Test simply by virtue of the fact that everyone’s attention was on the people who were trying to do the reverse, to pass for non-human.

Okay, not literally true, but it’s a nice little Hallowe’en fable.  Actually I spent the night at the house of some good friends, everything done up in a funk theme with old episodes of Soul Train being back-projected onto a sheet that hung in the front window and the sound turned way up so that the entire front of the house was turned into a giant television, running a constant stream classic funk artists playing to crowds of dancing Funkateers.

What I would love to have seen in our neighbourhood, is one of these awesome Alan Turing pumpkins. 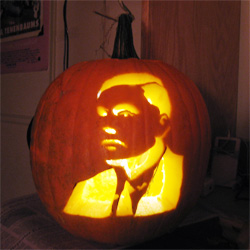 This image comes to us care of one of our favourite sites, Boing Boing, and specifically BoingBoinger Xeni Jardin, although over here you can see it being created.

And just to see how everything connects to everything else in the Turing-Net, if you look at the “making of” page, you’ll notice that the image used in making this pumpkin is actually the stencil of the Turingator, featured earlier on this blog.

Post Script:  If anyone went out dressed as Alan Turing or anything pertinent, like Data from Star Trek: The Next Generation, a Terminator, or for that matter Snow White or an Apple, feel free to send in photos.  If I get responses then I’ll include them in a later post (unless you let me know that you don’t want yours posted).