The Other Anniversary and All That Jazz

Today is the other Alan Turing anniversary this year.  The big, joyous one — the one we’re all waiting for — is the 100th anniversary of his birth, now just 16 days away on June 23.

But today was the day in 1954 that Alan Turing died by suicide, just shy of his 42nd birthday. (If you don’t know the background, check the About Alan Turing  page for a synopsis.)

Now, I remarked on Ray Bradbury’s death yesterday and made a point of doing so in a way that was anything but solemn, since solemnity just didn’t seem to suit a guy who had been so relentlessly cheerful in his day to day life.

I’m not sure we can say that Turing was relentlessly cheerful the way Bradbury was.  But Turing (as I’ve noted before) was a man who had a sense of humour that persisted right into his last years, even if the humour sometimes turned dark as a result of his circumstances.

For instance, when Turing wrote that he was afraid that his conviction for engaging in homosexual sex would result in people believing the syllogism “Turing believes machines think / Turing lies with men / Therefore machines do not think,” he was expressing a real fear, but there was an obvious absurd humour in it as well.

The problem is that his life has such an obvious tragedy to it, and that tragedy is so compelling and so important, that we sometimes forget there was anything else.  When that happens, the real man gets lost behind the dramatic story — our view of him gets skewed.

So even today, on the anniversary of his death, I want to remember the other side of Turing, the part that kept him making wise-cracks in letters to his friends even while things fell apart. 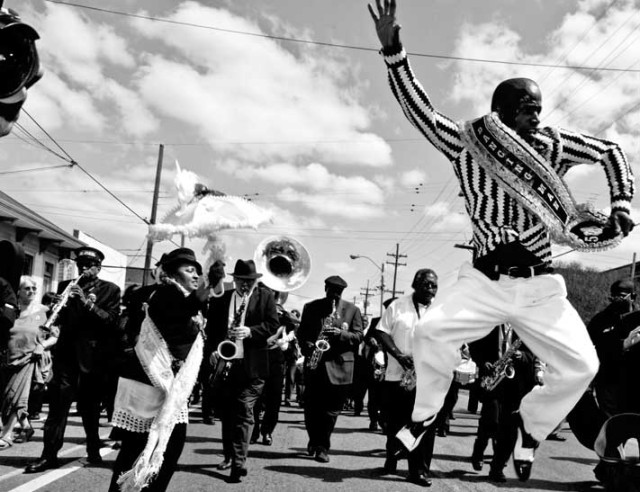 If I could, what I would do today is to hold a jazz funeral to remember him by. The jazz funeral is a New Orleans tradition that has long, deep roots in the community going back to pre-slavery African traditions.  The funeral has two distinct parts:

On the way to the cemetery it was customary to play very slowly and mournfully a dirge, or an ‘old Negro spiritual’ such as ‘Nearer My God to Thee,’ but on the return from the cemetery, the band would strike up a rousing, ‘When the Saints Go Marching In.’

When the hot jazz starts in that second half, the mourners turn into celebrants, dancing, twirling umbrellas and parasols, and singing along to the music.

Well, I have no budget for a jazz funeral and according to my site statistics you folks are scattered all over the globe, so I’m not sure where we would hold it in any case.  I will give you this facsimile, though.

For all the reasons I’ve set out, I’m going to leave aside the walk to the burial — the part with the mournful, sombre music.  Right now, we are on our way back from the funeral and one of the best jazz outfits ever — Louis Armstrong and his band — are kicking out the jams, dancing us home, and everyone is celebrating.

This entry was posted in anniversary. Bookmark the permalink.