This page brought to you by IndieBookLauncher.com. Click banner or text link to find out more.

In theory the Alan Turing Year is winding down–it has less than two months to go–but in fact it doesn’t seem to be slowing much.

Here’s one of the latest testaments to Turing’s place in history: a detailed speculation on whether the Second World War might have turned out very differently if he hadn’t existed.

Now, counterfactual speculation is always tricky, so whatever conclusion one reaches in an exercise like this will always be open to attack. Whatever your conclusion, someone can find traction to make an argument against it. There are simply too many variables.

Perhaps the most amazing thing about going through this exercise with Turing, then, is simply that you have to ask the question very seriously. Because it’s entirely realistic to say that without him the war might have ended very differently indeed, and there are not many people about whom you can say that.

In this case the person doing the speculating is Jack Copeland, Professor of Philosophy at the University of Canterbury, New Zealand, and Director of the Turing Archive for the History of Computing.

We’ve seen Professor Copeland on this page before, most notably in Alan Turing & The Suicide Question. Copeland is conducting this historical exercise on the web page Big Questions Online. 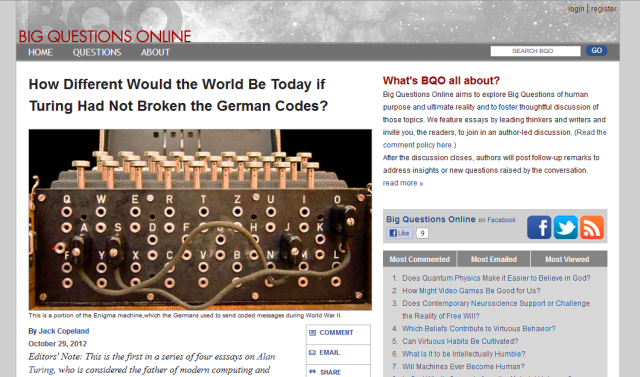 For a Turing scholar, Copeland is admirably restrained in his assessment of the possible effect of not having had Turing’s contribution to the Allied war effort.

That restraint on Copeland’s part, that conservatism, gives his estimate of the difference between the world with Turing and the world without him even greater impact than a more free-wheeling scenario might have had.

History records that the allied armies took roughly a year to fight their way from the beaches to Berlin. In a counterfactual scenario, in which Hitler had had more time to consolidate his preparations, this struggle might have taken much longer—twice as long maybe. That translates into a very large number of lives. At a conservative estimate, each year of fighting in Europe brought on average about seven million deaths… these colossal numbers of lives—7 million had the war continued for another year, 21 million if, owing to the Atlantic U-boats and a strengthened Fortress Europe, the war had toiled on for as long as another three years—do most certainly convey a sense of the magnitude of Turing’s contribution.

The number of lives at stake is so large that even if you cut them arbitrarily in half, or quarter them, they’re still vast.

The number of people who would have suffered and died rather than having lived out their lives is immense. The number of their descendents who would not have been born, millions of them alive today, is even greater. Maybe it even includes you.

Even putting aside Turing’s other achievements–his continuing legacy in computer science and artificial intelligence, not to mention his later work in biology–that’s one hell of a legacy.

This entry was posted in Jack Copeland, World War II. Bookmark the permalink.