Super-Nerd Benedict Cumberbatch, Who Already Has a Geek Hat-Trick, May Star in Alan Turing Biopic

This page brought to you by IndieBookLauncher.com. Click banner or text link to find out more.

Days since the Centenary: 224

I was talking with my business partner Saul–who is the other half of IndieBookLauncher.com–the other day and we were speculating about which existing Star Trek villain might get reprised in the new movie, Star Trek Into Darkness.

Saul ventured that it was probably the great Khan Noonien Singh, played with awesome dignity and dangerousness by Ricardo Montalbán in the original series episode “Space Seed” and in the second ST movie (he is also a character in several ST novels and doubtless in some of the famous slash fiction that notoriously emerged from the series).

I said I hoped he was right, because they’re almost certain to bring back Khan at some point, and if anyone can do the character justice it will be Benedict Cumberbatch, who is known to play the villain in the next movie (though the identity of the villain is, as I write this, still under wraps).

Then, yesterday, came the news that Cumberbatch appears poised to play Turing in the biopic that caused such a fuss last year when the screenplay sold for a large (though undisclosed) sum on the strength of Leonardo DiCaprio wanting to star. Some time ago DiCaprio dropped out, now it seems Cumberbatch is likely to take over.

Which is good news for Turing fans, because Cumberbatch is an awesome actor (although the A.V. Club alleges that he’s not an actor, in fact not even a human being, but rather a “complex script file that allows users to produce the most British person possible”). And Cumberbatch’s star power can only help in terms of actually getting the film made.

I want to pause, though, to consider just what a geeky conquest this is for the actor. In the headline I referred to this as a hat trick, because:

Now it appears he’ll play Turing, too. Maybe I should have said he’s scored a–well, whatever the hell the word is that’s like hat trick but means scoring four goals in one game instead of three (I am nerding out at the moment, so don’t ask me to recall sports things). 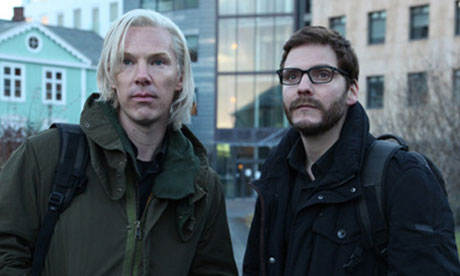 And, lest we forget, Cumberbatch already plays Sherlock Holmes, who is nothing if not the uber-nerd (though a coke-snorting nerd who’s good with his fists).

All of which is not even to mention that he’s signed on to star in the upcoming sort-of-Monty-Python movie, which involves four surviving Pythons. Nerd-gasm anyone?

This can only mean one thing: I look forward to his inevitable role as the newest character on The Big Bang Theory.

This entry was posted in Hollywood, Uncategorized and tagged benedict cumberbatch, julian assange, sherlock, the big bang theory, the fifth estate, the hobbit. Bookmark the permalink.